Presence of Mold on Peat in Bales

While the sight of mold growing on a freshly opened substrate bale may seem worrisome, they are not pathogenic to plants.

Presence of Mold on Peat in Bales

Mold on peat moss is usually created by the growth of filamentous fungi. If the water content is high, these organisms will grow on almost any type of organic matter. While the sight of mold growing on a freshly opened substrate bale may seem worrisome, they are not pathogenic to plants. There are numerous species of fungi, and those found in peat moss are mostly saprophytes, meaning that they only feed on decomposing organic matter. Some of these microorganisms can even have beneficial effects on plant growth.

The Benefits of Microorganisms in Sphagnum Peat Moss

Sphagnum peat moss contains numerous microorganisms that occur naturally in peat bogs, including the bacteria Bacillus, the actinobacteria Streptomyces, the fungi Penicillium, Trichoderma and Mucor, to name a few. The presence of a healthy community of microorganisms in sphagnum peat moss makes it more difficult for root rot organisms like Fusarium to establish, because the inoffensive saprophytes compete with the pathogens for available resources. Moreover, some species such as Trichoderma and Streptomyces are known to synthetize molecules that are quite effective at suppressing some root rot pathogens though various modes of action. The microorganism population in peat varies depending on several factors, including the harvesting site. Blond, high quality and less decomposed peat typically has a more diverse and healthy population. It is therefore more susceptible to provide disease suppression. However, if the harvested peat isn’t stored properly, these suppressive properties will be lost. Berger has developed improved methods for storing harvested peat to eliminate or reduce any negative impact during storage and packaging.

The mold that can be seen on this picture is caused by saprophyte fungi, microscopic organisms found in peat bogs that are not pathogenic to plants. They mainly develop on the external layer of peat or growing media, underneath the plastic bag or wrapping, where water tends to accumulate during prolonged storage periods.

In unused peat-based growing media that have been stored for a prolonged period, some mold may be seen on the external layer of the mix, just beneath the plastic bag or wrapping. Water can build up in this area of the bale, which generates optimal conditions for fungus development. Mixes with high fertilizer charges or those that are exposed to high temperatures during storage are more at risk to develop mold, but it can occur on almost any peat-based product.

If you receive a product that has visible mold growing on its surface when you remove the plastic bag or wrapping, do not be alarmed. The product is perfectly safe to use and plant growth will not be affected by these microorganisms. The material can be managed like any other Berger product you have received in the past:

However, it is important to note that if a substrate is kept excessively wet during the crop cycle, populations of these microorganisms can grow considerably on the surface of the growing media in the pots. This may interfere with water distribution and penetration in the mix. To prevent this, we recommend following good irrigation practices; avoid overwatering the growing media and allow it to dry down to a certain extent before applying more water. 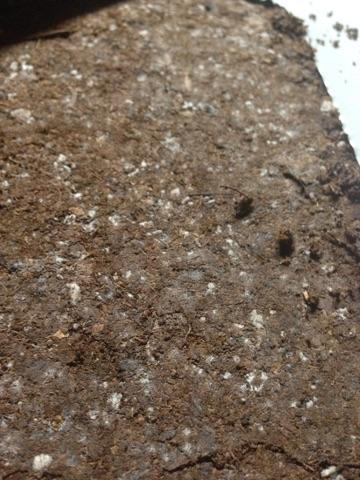 Freshly opened bale of peat-based growing media with mold on its surface.

How to Overcome Challenges in Berry Growing with CEA

From Field to CEA Berry Production