In the nursery industry, bark has been the main ingredient in nursery container mixes for many years because it adds weight and is economically priced.

Back to hints and tips
DOWNLOAD THE TRAINING GUIDE IN PDF

All bark mixes are not the same; certain factors have a large impact on bark’s physical and chemical characteristics as well as their interaction with other components including CRFs. Bark as a component can be purchased as Fresh Bark, Aged bark and Composted bark. Fresh bark can contain phenolic compounds due to the lack of proper composting and may inhibit growth. When added to a growing media, rapid decomposition of this material causes nitrogen depletion in the mix. A fresh hammer milled bark is often very coarse and has less available nitrogen than aged or composted bark.

Processing bark beyond its fresh raw state allows toxic compounds to be broken down and assists in reducing nitrogen immobilization. There are two processing techniques that are employed in the industry to make bark more stable and consistent as a component. As previously mentioned, the bark can be either aged or composted. The aging process of bark is simple; debarking the trees, hammer milling the bark to a specific particle size and stock piling the bark for 6 -12 months. The final product can then be added as a component. Similarly, the composting process also begins with debarking and hammer-milling the bark to specific sizes of bark chips. However, composting produces a more stable product due to the fact that during the process nitrogen is added to the bark pile, the water content is monitored and adjusted as needed and the piles are turned over to introduce oxygen in order to maintain aerobic decomposition.

The processing of bark has its advantages over fresh bark production. Aged bark has a lower nitrogen tie down, particle size is smaller than fresh bark and toxic compounds are more degraded. Composted bark has and even lower nitrogen tie down. Compared to the other two processes, the high temperatures generated during composting process partially sterilize the material and help eliminate any undesirable contaminants. Particle size is even smaller and more uniform with composted bark.

*Data from Government of Western Australia

Not Any Old Tree

The species of tree that is used to produce the bark must be taken into consideration when designing a nursery container mix. Hardwood species typically contain toxic compounds and the bark decomposes very rapidly because of the high cellulose content. Another major disadvantage of hardwood bark is that it demands large amounts of nitrogen to decompose.

Bark from softwood species on the other hand contains less toxic compounds and the bark decomposes slowly thus demanding smaller amounts of nitrogen to decompose. In the US, Softwood pine is the most commonly used species of tree to process bark for nursery mixes. Bark is used in nursery mixes as an aggregate that improves drainage and its slow decomposition is ideal for long term crops. A significant volume of bark added to the mix increases pot stability since it adds weight to the containers. Bark does contain some nutrients, however it must be understood that nutrient content is not sufficient enough to sustain growth.

Benefits of Peat with Bark

If one is to look at the disadvantages of bark, the main issue can be its heavy weight creating higher shipping costs. Its chemical characteristics depend on the decomposition rate which can vary if not monitored properly. During the composting process if the moisture content is allowed to dry below 35%, wettability can become an issue.

Unlike conventional nursery bark mixes, those produced by Berger have a larger percentage of peat than bark. Peat holds more water than bark which drains rapidly and dries out quickly. Peat is the main component of Berger mixes since it increases water retention, and improves porosity. Peat has a very high CEC when compared to bark. This can be very helpful in initiating rapid root development and vegetative growth in young nursery stock. Good quality peat also improves the structure and stability of the mix by forming aggregates that create a network of pores to generate aeration and water conductivity. 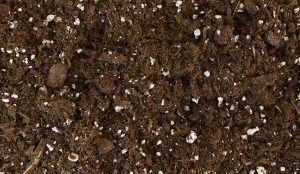 Conventional nursery bark mixes tend to have very high bark content while containing a very small proportion of peat. With CRFs being a widely accepted practice of feeding nursery stock in containers due to its simplicity and convenience, I would be remiss not to compare the nutrient holding capacity of bark versus good quality surface active peat. The most important thing to remember about CRFs is that the release of the nutrients is dictated by coating thickness, coating composition and more importantly, soil temperature and water content. Exposure to water is controlled by the coating and release is predictable at a specific soil temperature provided by the CRF manufacturer. No single product is able to release an optimal amount of fertilizer in every situation. Abnormally cool weather slows nutrient release while excessive temperatures can increase release which a bark mix consisting mainly of bark and a small portion of peat does warrant high rates of CRFs to be applied to the mix mainly due to the fact that that the CEC. In other words, the ability to hold onto nutrient reserves in a heavy bark mix is very limited. In reality there is a false sense of security in adding high rates of CRFs. When a bark mix has a limited capacity to hold onto reserves, especially in areas of heavy rains or with excessive overhead irrigations, the nutrients that are easily leached out of the container are not only unavailable for the plants, but can also have a significantly negative impact on the environment.

Last but not least, it would be good to review application methods of CRFs. Whether the CRF is localized on the top of the substrate as a top-dressing, layered in the middle of the pot, dibbled in a pre-drilled hole below the transplant or incorporated into the mix prior to planting; the proximity to the actual root surface area makes CRFs more available for uptake, especially in a mix with a good CEC that is able to hold onto nutrients in between irrigations.

How to Overcome Challenges in Berry Growing with CEA

From Field to CEA Berry Production